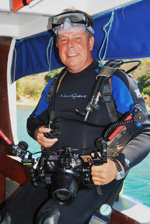 Larry was first introduced to Lake Malawi cichlids in the early 70’s and has been keeping and breeding them since then. The fish room has got bigger over the years and was consumed by these beautiful fish. “Tropical Fish are a full time job for me”. He presently runs almost 100 various size aquariums at home, and has been importing Cichlids from Lake Malawi since 2006 from Sutart M Grant. Stuart was a dear friend of mine who passed away in October 2007. You can see many beautiful underwater pictures that have been taken over the years on his website here.

In January 2003 Cichlid News Magazine published Larry’s article and pictures on the genus Mylochromis. Larry also discovered the interesting feeding behaviour in Sciaenaochromis fryeri and photographing for the first time a new species of Lethrinops sp.”mbenji roundhead” and Otopharynx speciosus at Nkhomo Reef.

Larry also contributes time as a moderator on several forums and is a contributing photographic author to The Cichlid Companion Room and Buntbarsche Bulletin for the ACA.

During September 2013 Larry assisted Ad Konings (thru the ‘Stuart M Grant Conservation Fund), along with others, in placing Ps.saulosi back on Taiwanee Reef. These fish are being produced by Stuart M Grant Ltd which operates the largest Cichlid Export facility on Lake Malawi. During September 2014 Larry supervised the placement of Ps.saulosi back to Taiwanee Reef again, along with other Cichlid Enthusiasts, who were willing participants.

The 2017 transplant of Chindongo saulosi (formerly Psuedotropheus) to the reef was a record number that year of 717 fish!

In his spare time you can find Larry at local fish clubs (Hamilton & District Aquarium Society) and others doing the “fish thing” (speaking or attending).

In September 2020 he will travel to Lake Malawi for the 18th time.

Larry does a few different talks  but is mostly asked for the most current ‘Swimming with Cichlids’, (Updated yearly) on the most recent Lake Malawi Safari trip. Also providing updates on the Conservation going on in Lake Malawi. FEES: Negotiable  + Travel Expenses. Larry can be contacted at larry@malawicichlidimports.ca